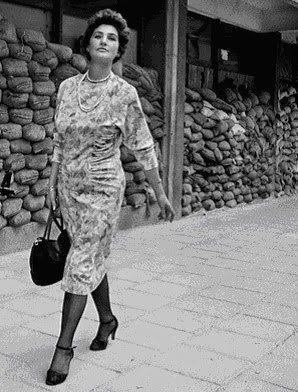 Oh wow, check out this sophisticated dame hanging out in the potato sack district of Sarajevo. Is that 1960s era Sophia Loren on her way to a Vogue Italia photo shoot? Or maybe a queen trying to go incognito among the people and failing miserably? You could walk into a thousand potato sack districts and never find one woman with half the sophistication and elegance of this lady.
My bad. I forgot to show you the rest of the picture. 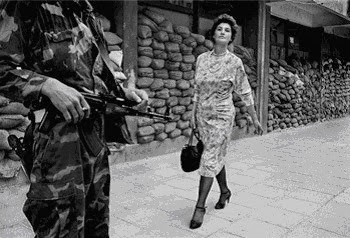 This is Meliha Varesanovic, and she's not going to high tea with the queen, she's going to work. It just so happens that she's working in Sarajevo in 1995, during the longest siege of a capital city in modern history. For over four years, Bosnians were trapped by a force of approximately 13,000 Serbian soldiers who wanted to claim the city for a new independent Serbia. And the best way to do that, in their eyes, was to starve the Bosnians out. But starving took fooooorrreeeeverrr, so the Serbian army hurried the process of depopulating the town by shelling crowded areas and shooting at civilians, one by one. For years, Bosnians couldn't get from one place to another without worrying about hidden snipers shooting at them from buildings. Running errands was like living out the single-shot battle sequence in Children of Men. 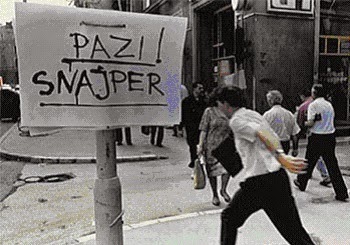 BIRN Archive
"Watch out! Sniper! Not a joke sign!"

So how do you counter bombs, psychological torture, actual torture, and trained, hidden gunmen when you're just a regular person trying to live your life? How do you cleave to normalcy when your world has turned to hell? For Meliha Varesanovic, the answer was putting on her lipstick, heels, and pearls, holding her head high, and walking to work day after day like the Serbian army didn't exist. She's looking past the guard who's holding her town hostage like he's not even there. Like he's nothing. You can scream slurs, you can give dirty looks, you can choose to walk on the other side of the street, but nothing is more powerful and insulting than acting like someone doesn't exist. Especially if that person can kill you on a whim and you both know it. The man who took this picture of Varesanovic described her message as a very simple "You will never defeat us."
Twenty years later, he went back to Sarajevo and found Varesanovic again. She was still as classy as ever: 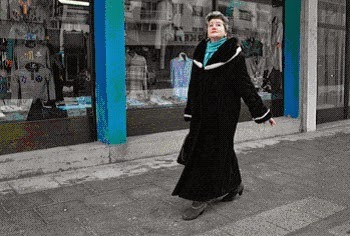