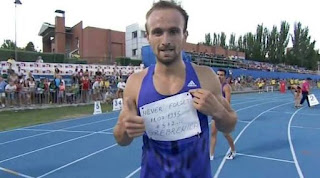 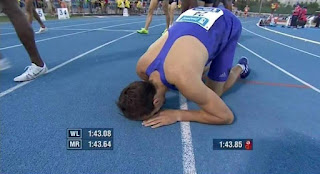 Rezultat 1:43:85 postignut u Madridu uvrstio je našeg atletičara Amela Tuku među sedam najbržih trkača na 800 metara ovoga vremena. Respekt.
Amel Tuka (born January 9, 1991) is a Bosnian middle-distance runner who specializes in the 800-metre race. Tuka holds two national records of Bosnia and Herzegovina for the 400 metre and 800 metre disciplines.
Tuka was recruited by Atletski Klub Zenica to train full-time in track and field after winning a low-profile 400-m race in Zenica. Since then he has become the most competitive middle-distance runner in the country, having competed and won medals in numerous regional and continental (European) championships.
In June 2013, Tuka won the 800 metre race at the 2013 European Team Championships Third League, running a time of 1:51.11. Less than a month later, Tuka earned third place at the 2013 European Athletics U23 Championships in the 800 metre, running a national record time of 1:46.29.
At the 2014 European Athletics Championships, Tuka placed sixth in the men's 800 metres final, breaking his record by running a new personal best of 1:46.12.
On , Tuka won the men's 800 meters at the 20th Annual International Meeting in Velenje, Slovenia and qualified for the2016 Summer Olympics. On , he ran even faster, winning the men's 800 in with a time of 1:43.84.
The result in put Tuka as the seventh fastest 800 meter runner in the world at the time, tied with Boris Berian.
(wikipedia)